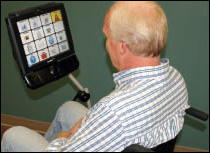 An Overview of ALS and Assistive Technology

The Greater Philadelphia Chapter implemented an innovative Assistive Technology Program in 1993.  I have been with the Chapter since 1996 and for the past fourteen years, have seen assistive technology significantly improve the lives of those living with ALS.  Technology has continued to change and morph as the years pass and now people with disabilities have many choices that can help them communicate.

The information below is to help you have a better understanding of Augmentative Communication and techology.

Do you have a question about assistive technology, or need help or guidance? Send an email to Alisa Brownlee, ATP, Assistive Technology Consultant.

Most patients with ALS experience difficulty with speech and movement during the course of their illness.  Some PALS (persons with ALS) will completely lose their ability to speak and to use their hands.  The inability to speak is frustrating and emotionally devastating.  My job is to use technology to get an ALS patient communicating so they can be an active participant in their family and community life, become more independent, and make medical decisions.  There are many different electronic communication devices on the market.  Some devices just speak for the person and some are desktop or laptop computer that not only speak for the person but also allow the user to have full access to computer functions.  The easiest way to describe a communication device is that the user types on a traditional keyboard and a computer-synthesized voice repeats everything the user types into the device.

Communication devices are referred to as “AAC”.  The term “Augmentative/Alternative Communication” (AAC) refers to any mode of communication other than speech.  When Medicare began paying for communication devices in 2001, they decided to refer to AAC devices as SGD’s—Speech Generating Devices.  The acronyms are interchangeable).  AAC includes systems such as sign language, symbol or picture boards, and electronic devices with synthesized speech.  Although the same systems can be used for either augmentative communication or alternative communication, there is a difference between the two.  Augmentative systems are used by people who already have some speech but are either unintelligible or have limited abilities to use their speech.  In such case, other modes of communication are used to support, or supplement what the person is able to say verbally.  Alternative communication is the term used when a person has no speech.  These people must completely rely on another method to make all of their ideas, wants, or needs known.

Voice output on a device is either digitized or synthesized.  A digitized voice utilizes recorded human speech.  Synthesized speech devices use computer- generated speech.  There are pros and cons to both types of devices.  Digitized devices, although more “normal” sounding, are limiting because they can only say the words or phrases programmed on the device.  They do not allow for free- thinking.  Synthesized devices allow the user to have pre-programmed phrases or words and also have the ability to spell out novel thoughts.

Communication devices can be accessed several ways.  The term access refers to the way the individual will operate the communication system.  For example, one individual may use fingers for typing, with another moving the eyes to point at letters, thereby spelling words.  An access method for an individual will often change as the disease progressively leads to weakening of different areas of the body.  This means that a patient who at one point uses hands for communication may lose this ability and eventually have to use another access method.  It is important for each individual to know that communication does not have to stop simply because hands become weak and typing is no longer possible. We have a significant number of PALS that use headmouse systems--a receiver is placed on top of the computer monitor and the user wears a reflector dot on their forehead in order to move the mouse around.  Special software allows the user to "dwell" on a letter (timed stoppage on a letter) and the computer will then type the letter they are dwelling on.  There are about three companies that make head mouse systems and they are about $500-$2,000 and are not covered under insurance for computer use.  (they would be if they were part of a communication system but if the user simply wants computer access through a headmouse, that is not covered).

If a patient can no longer use their hands to type, they would need to use a switch.  A switch is used to operate a communication device when the individual does not have the ability to use his/her hands or fingers.  The switch is connected to the electronic communication device and acts as a kind of control unit.  When activated by only one touch or movement, the switch sends a command to the communication device to start or stop.  Switches may be activated with any part of the body, including hand, foot, cheek, eyebrow, eyeblink, elbow, knee, etc. A switch is chosen according to a patient’s physical motor capabilities and should be chosen with the thought in mind that ALS is a degenerative disease and motor function will decrease as ALS progresses.

For more sophisticated computer access there are several “eye gaze” computer systems on the market.  These high priced specialty computers relay strictly on eye movement for activation.  This type of machine is only used by people that have little or no muscle movement left on their bodies.  In order to use eye gaze systems, the user had to remain still in order to use this computer.  The basic premise is that a CCTV camera is placed below a computer monitor.  The camera tracks your retina movement.  Special software is loaded into the computer and allows the user to have full access by simply moving their eyes around the screen.  This equipment ranges around $10,000-$25,000.00 There are some drawbacks though—most of the systems can’t function in natural light so the individual must live/work with shades down and minimum natural light.  Producers of eye gaze systems are DynaVox (www.dyanvoxsys.com) Prentke Romich Company, (www.prentrom.com) Quick Glance ( www.eyetech.com), My Tobii at http://www.assistivetech.com/, and LC Technologies (www.lctech.com). Eye gaze users can do email, internet, phone use, etc.

In the past, communication devices were not a covered item under insurance policies.  In 2001, Medicare announced they would cover of cost of these devices.  After that, most private insurances followed suit.  Electronic AAC devices range in price from $4,000-$10,000 with the average being around $7,000.  Most private insurances will only pay 80% of that cost leaving a 20% co-pay for families. Not everyone gets a communication device because of insurance issues or the fact that they might not be interested in using a device.

There are also psychological issues surrounding the use of communication and or adaptative devices.  In a survey done in the 90's, researchers found that people equated the severity of a disability to the "visual ness" of the disability.  Meaning those with low vision didn't' want to use a white stick because it proclaimed to the world "I am blind".  Same goes with people using a computer or communication device to speak.  If it looks abnormal, they tend to shy away from it.  However, if it looks mainstream, they tend to accept it more.  Ideally, we want to keep our PALS using mainstream technology so Netbooks, smaller laptops, Palm Pilots, and iPhones/iPads are popular within our community.  It may be a short term use, because we are dealing with a progressive disorder, but for those few months our PALS are quite happy and enjoying the technology.